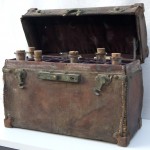 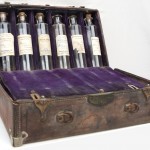 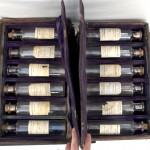 The chests with sample bottles 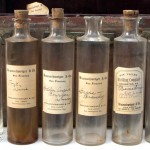 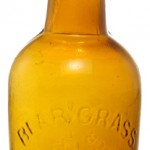 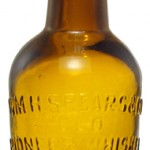 Whiskey salesman, check out the bag

A pair of leather salesman sample bags with proof that whoever was using it was selling spirits advertised by and for the Braunschweiger Company was found recently in Idaho Falls, Idaho. Whether Braunschweiger himself used one of the bags or his salesmen used them is still up in the air but direct ties to some of his most popular brands are unarguably Braunschweiger. Brands like Beargrass, Old Pioneer, Golden Anchor, Civilian White Rye, Golden Rule XXXX, California Club and other sample vials were found, labeled and ready to be tasted by potential customers were neatly fitted into these leather satchels.

Each sample vial had a label reading Braunschweigher Co. San Francisco with the address 6&7 Drumm Street or the name of their liquor wholesaler, Oak Valley Distilling Company.  A couple had dates, one read 1895.   It is believed Herman Braunschweiger began his wholesale liquor business around 1878 in tandem with Amedeus Fenkhausen out of San Francisco. According to John Thomas in Whiskey Bottles of the Old West, he joined Fenkhausen at the corner of Front and Sacramento Streets in San Francisco. Fenkhausen had been in the business since 1861 disappeared and re-established himself again and it’s thought that in 1878 he entered into a partnership with Braunschweiger. By 1881, Braunschweiger was gone and by 1883 had formed a partnership with Edward Bumstead.
The first and apparently only brand the two marketed, at least with embossing on the bottle, was their heralded Bear Grass Bourbon, thought to have been sold for only a year or so.  Interestingly, Braunschweiger made sure that there was a bear embossed on the front of the bottle.  Just the head this time but on a nicely embossed bottle that is quite rare and very collectible today.  Working from 223 California Street in San Francisco, Bumstead left in 1884 to join Wolters Bros. & Co.  The name of the company was changed to Braunschweiger & Co.   Bumstead’s name is on only one other bottle, the Hibernia Bitters.  Both bottles have his name misspelled as Bumsted. So as Thomas points out, the Bear Grass Bourbon bottle is quite rare and in fact nearly half of the examples known were found in Idaho.  Lewiston, Idaho to be exact.  Which brings us full circle to the bags and their owners and how they got there.  It was known that Braunschweiger traveled, a lot.

It was Jeff Lawrence, the gentleman who purchased the original case, and eventually another very similar example, from a gentleman in Idaho Falls. Lawrence talked at length with the person who had the two cases and who was indeed a relative of the owner of at least one of the leather satchels, the purported salesman. Lawrence was told the salesman was an older gentleman who had them in Idaho but traveled throughout much of Idaho to sell the whiskey. The seller of the bags also told him a story about his great-grandfather who was really quite a man.” Lawrence explained, “The great-grandfather immigrated from Germany around 1860,” Lawrence explained. “He fought in the Civil War for the Union, then fought against the Apache Indians in Arizona and even received the Medal of Honor for his actions.”

So whoever owned the bags, whether it was the relative of the owner of the bags that were purchased by Lawrence or Braunschweiger himself, is not really that important. It would be neat to know that Braunschweigher used them to sell his whiskey, he had to use some bag. It’s just something I guess we’ll never know. Most assuredly Braunschweiger had something to do with the “gear” he gave his salesmen and therefore had the bags assembled.  It appears that at least one bag was made by the Covington Distilling Co.  Their name, Oak Valley is richly embroidered in gold against a purple background in the fold down top.  On the bottom it reads Braunschweigher Company 228 California Street Oiffices, San Francisco, Cal.

But as history speaks volumes about the old west, the traveling salesmen and whiskey dealers, one name that comes up which will surely be heard above the rest is Herman Braunschweiger. He was a traveler, a true salesman, the evidence is in the bags, the products he sold and the places he visited. The bags explain the man in a way, his ideas and visions. Never wavering, his calling brought him countless stories and products like Bear Grass and Golden Rule. I’m asked occasionally what the difference is between collecting western and eastern bottles. I can’t think of a better explanation than the story of Herman Braunschweiger. A man with boundless energy, making a life in a mostly barren, ever-evolving world. San Francisco was hardly Philadelphia and one not depend on a lawman when traveling from town to town. A quick hand and trusty revolver were more much more dependable. The need for whiskey in the mining camps and lumber mills throughout the west was not lost on Braunschweiger. The little towns along the way provided him with places to stay and strangers to befriend. He saw an opportunity and went for it. At a time when most men lived to 46, he rode straight into the abyss, his own man. He was trying to conquer a world that still needed decades to get sorted out, like the whiskey he sold, to mellow. It was a world that today, we call the old west. To Herman Braunschweiger, it was simply known as home.

9 comments on “Braunschweiger Sample Salesman Bags Turn up in Idaho”