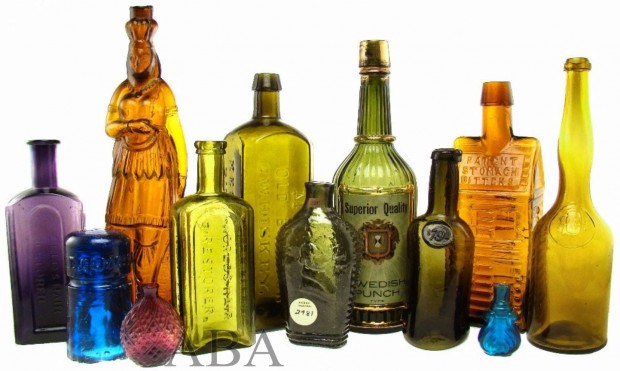 Antique bottles are more popular than ever! Not since the 1970′s has the popularity of antique bottle collecting grown at such a rapid rate. The resurgence of collecting is due to many factors, but one major contributing factor is the rising popularity of Internet, and online auctions.

Ebay.com, the world’s largest online marketplace, has helped tremendously in creating a new marketplace for collecting and inspiring a new generation of collectors.

More likely, however, it is the fact that bottles stand on their own as beautiful handmade objects and on older pieces made before 1900, no two are alike. For some, bottles remind them of the old west; saloons, brothels and traveling medicine shows, the days of Buffalo Bill and Mark Twain and the bottles that came with them. Other people collect fine glass, made by the most expert glass production houses in the United States at the time. Factories like Sandwich and Stiegel and the other glass houses in New England and New Jersey. Still, others simply collect whatever catches their fancy, their collections, a hodgepodge of newer and older, blues and ambers, mostly dictated by whim and simple interest, and a desire to just collect. Regardless of the type of collector there are some basics which govern what people collect.

Bottles are valued by a number of factors, basically broken down as:

There are other things that make a bottle appealing. It might have an unusual shape, or have a misspelling on the bottle. Some bottles are worth more because of the particular marks of a specific mold maker. Bottles are basically broken down into two collecting areas. Bottles made in the West Coast and bottles made everywhere else. Bottles made in the West (or in some cases doing business out here but made outside of the West) are usually more valuable for a simple reason; in the 1870′s there were a lot more people outside of the West and less bottles were made. They are rarer and the bottle houses that produced them put out a very distinctive and desirable type of glass.

There are a number of different types of bottles people like to collect, they include:

Fruit jars and other food containers

Regardless of the area you collect, it is often the thrill of the chase that creates the most fulfilling part of putting a collection together. I know people that may collect inks and once they feel they’ve accomplished this task, they sell their collection and start on something else. Some people collect a little of everything and some people collect only one tiny area of a very general topic. Income dictates what you collect but therein lies a misconception, too. Sure a historical flask collector would like to own a rare Baltimore flask in sapphire blue, but starting out with a crude, sparkling example in aqua can be just as rewarding. Some people say that whatever you collect, just make sure that you like it. That’s the most important thing. If it goes up in value, great, you’ve not only collected something you like, but it has been a favorable investment, also. It’s hard to imagine where bottle and glass collecting will fit in, in say, a hundred years from now. You can bet, however, that there will always be people who appreciate the fine craftsmanship and raw beauty contained in glass. You don’t have to go far to see it. Remember, sometimes the best bottles are empty!