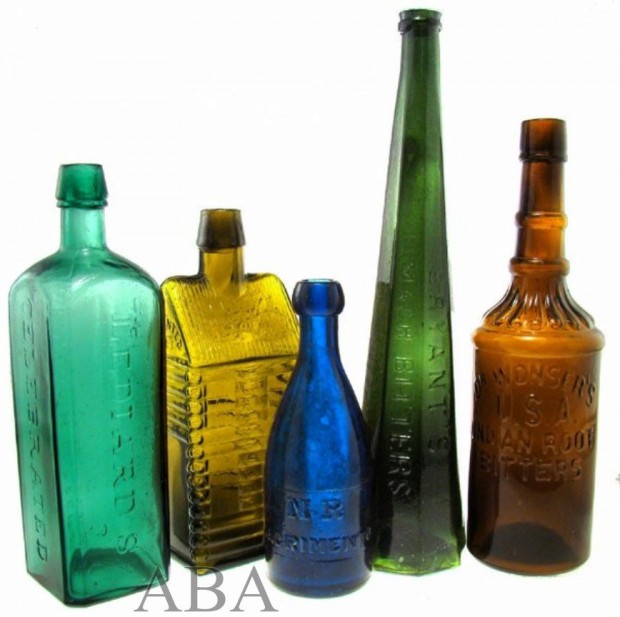 In the 1850′s, the West was a bustling, populated area full of rugged and optimistic people from all over the world. San Francisco was the center of this new world and one of the new industries that would begin there was the manufacturing of glass bottles. In 1858, Baker & Cutting became the first company to try their hand at producing glass. In those days, the most important types of containers were for storing food, and Baker & Cutting decided to make that their priority. They began producing pickle jars and other types of food jars from their meager San Francisco glass house. Not long after, Baker left the company, apparently distraught over the inferior quality glass and little profit. Cutting continued by himself, although he discontinued producing his own glass and instead ordered his products outside of California. Because of the poor quality of glass, few of the Baker & Cutting bottles have survived the ravages of time.
Today, there is only one known example of their work with their name on it intact. Doubtless, there are other products that they made in circulation, but they are unmarked and, unless proven otherwise, trade hands as being the product of another glass house.

The fact that the Baker & Cutting Company made a valiant effort in supplying the West with glass probably did not go unnoticed by an Eastern glassblower by the name of Carlton Newman. Bottles were a scarce commodity and pieces were often shipped from as far away as Honolulu, Tahiti and the Mexican Coast. It was common for a bottle or jar to have a value which was ten times the value of the contents. There were companies that specialized in recycling bottles which led to products being put up with new paper labels placed over embossing for entirely different products and companies. Before 1862, for a Western company to have a bottle specifically made for them with their name on it, they would have to order them from glass companies located in the East. There are some Western bottles which were made for Western companies which were blown in the East. Many of these were made by the Union Glass Works in Philadelphia for soda water companies and, although they aren’t of the same pedigree of San Francisco Glass Works glass, can be quite rare and collectible because of their association with the Gold Rush and the early development of California. Of course, a company did not need to have embossing on the bottle to stake their claim on the market. Most of them simply used a fancy label with their name on it. They would still order bottles from the East or buy them from a local recycler and then purchase the labels locally.

In 1862, Carlton Newman founded Pacific Glass Works with Patrick Brennan and began producing glass the next year at the corner of Iowa and Mariposa Streets in San Francisco. By 1865 the two glassblowers left Pacific Glass Works to start their own company, San Francisco Glass Works. In 1868, it burned to the ground and within two years Newman built a new factory located on King Street near Fourth for production of green, blue and amber glassware. In 1876, San Francisco Glass Works bought out the stock of the fledgling Pacific Glass Works and renamed the company San Francisco and Pacific Glass Works (SFPGW) with Newman serving as president. It was during this time that some of the most beautiful Western bottles were made. To this day, it is hard to determine which examples of particular bottles belong to which glass house. There are some revealing clues however… the most prevalent being the distinctiveness to the characters, or embossing, on the glass. SFPGW is attributed with having a particular and consistent curved “R” on bottles that were made by their mold makers. This trademark identifies the fact that it was not only blown in the West, but by the SFPGW, makers of the most popular Western bottles collected today.

Among bottles blown by both houses and eventually the SFPGW, were soda bottles, whiskey bottles and flasks, demijohns covered in wicker, medicine bottles, some inkwells, utility bottles and fruit jars and almost every other type of bottle you could imagine. Window panes were an exception because of the difficulty of producing panes. A glass house would specifically have to dedicate its entire operation to that area of production. Newman knew the real value of his company was in producing bottles for new companies eager to have a bottle with their own company name on it. In addition to the name of your company, for a price, you could also choose a special design to be embossed on your bottle, or even a picture. Animals were popular embossing patterns on bottles made in the 1870′s, including birds, horses, deer and of course, the bear as the mighty symbol of California . Mold makers spent a great deal of time perfecting their craft and the varied and detailed designs that remain today are truly a thing of beauty.

Bottles desired by collectors of Western glass today are generally broken up into six categories. They are sodas, whiskeys, bitters, medicines, inkwells and fruit jars. The value is then broken down into rarity; how many of this particular bottle are there? Crudity is another very important factor; does it show lots of crudity and bubbles in the glass, is the top uneven? Color is so important. One example might be worth $100, while the same bottle in a different color might be worth $1000. Why? Color, color, color. Other factors include an unusual shape or a misspelling on the bottle. You’d be surprised how many backward “S’s” there are on early Western-made bottles. Age of course, is an important factor in the desirability of bottles and with bottle making in the West having begun around 1860, most real important pieces were only produced for about thirty five years. Most of the truly good bottles from San Francisco, the era in which collectors might call the Golden Era of Western Glass. 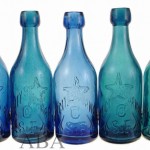 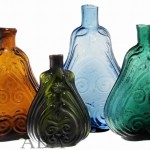 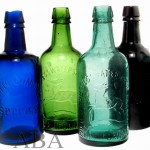 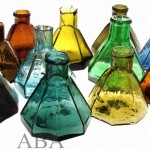 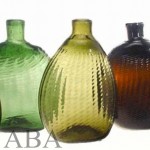 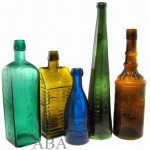 Although a majority of the bottles made in San Francisco were made for San Francisco companies, many bottles were also made for smaller businesses throughout the West. Prior to 1862, small soda manufacturers in Gold Rush towns like Shasta and Columbia had bottles made in the East and had them shipped out to them for distribution of their soda waters. It was a show of status for a company in the middle of nowhere to have their product in a bottle with their name on it. Because of the expense of purchasing their custom bottle, however, most of them probably ended up regretting it. The miners liked to use the soda as a chaser with their favorite brand of whiskey. Often times, the bubbling water was flavored and became a favorite for miners and children alike. The bottles were used over and over  and, for rugged and desolate towns like Shasta.  Most of those bottles didn’t survive unbroken. Those that did, are buried in outhouses and dumps long forgotten. The few examples that survive today are rarely ever seen and when they are, sell for thousands of dollars.

12 comments on “History of Glass”