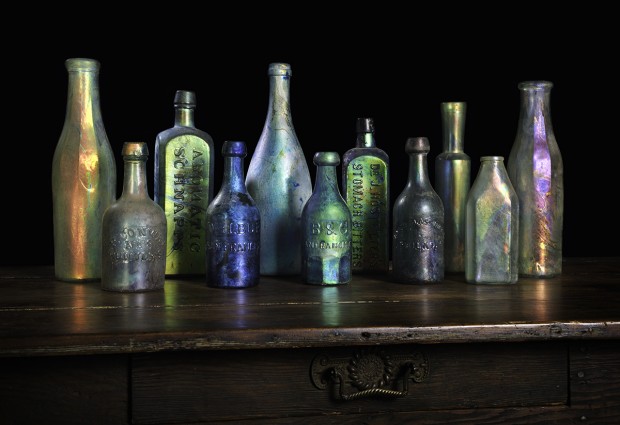 Paul Trouette Sr., Passed away June of 2016. He was born in Sausalito California January of 1934, a Veteran of the Korean War serving with the 82nd Airborne and the 187th Regimental Combat Team. These bottles were dug about 50 years ago, I can remember going over from were we lived in San Rafael to Benicia with my dad as a young boy, kicking and screaming because it was cold and we always got wet. Later in my childhood going along with him, it became clear to me, that bottle digging was like a modern day treasure hunt for a kid, getting to keep my finds and sell them to collectors to finance my own fun. One such dig, probably my dads most notable, was the Bear sodas “California Natural Seltzer Water”. They didn’t give up easy, years of prospecting and finding only broken necks and shards, kept him in a state of obsession, knowing that there had to be a complete bottle somewhere. Then, under a small land slide we uncovered a wooden trough, under it and along its side was where the first aquas came from. Next to them the quarts, all in perfect condition. This was where they captured the actual soda from the spring. By the end of that day, two cobalts and a lime green bottle had been found. I remember wrapping them in our tee shirts to keep them from damage. After our clean up the next day, we packed that old Redwood trough to my dad’s truck so he could repurpose it in our backyard for a Bonsai planter. Many more digs over the years from San Francisco to Eureka produced some of the finest examples of the West’s best whiskies, bitters, sodas, beers and cures ever dug.
All the best.
Jeff Trouette