A Super Rare Bitters That You Will Probably Never Own

Here’s a bitters that kind of came out of nowhere.  We had a call from a guy in Southern California and he was talking about a bottle he had, a bitters, really rare.  I asked him what it was and he said it was a Ryrie’s Bitters. I asked him again and he said, “you know, Ryrie’s Mountain Herb Bitters.”   I quickly looked in my ever present Bitters Bottles book and lo and behold in the very last listing under “R’s,” there it was, a six-sided bottle listed as Extremely rare.  In addition, it read, See: Wheeler’s Berlin Bitters.  In the Ring/Ham book there are seven Wheeler’s listed, most  of them extremely rare.   Maybe this guy had something.  After I spoke with him awhile, he told me he had the bottle for a long, long time.  It was the only bottle he had and he remembered from the 1970′s that it was probably valuable.

As it turns out,  it is a very rare and beautiful bottle. A light to medium amber, it is similar to a Wheeler’s Berlin Bitters in that it is six-sided and old, but not quite as old as the Berlin Bitters. Looking at the base and bottle in general, we’d say late 1870′s, early 80′s.  The bottle was poorly made might be a good way to put it.  As the pictures he sent clearly show, it is a very crude bottle, not necessarily in whittle and bubbles in the glass type of crude.  The sides are very uneven and the entire bottle is a little askew.  Interestingly, it has a ground lip along with an applied band.  We wondered if maybe the ground lip was done at a later date as the two just don’t go together.  The Wheeler’s link is probably valid.  It’s similar in shape to their other bitters, the company was in business up until about 1890. Most likely it was a great idea at the time and just didn’t go anywhere.  It seems like the best bitters are just that.  Somebody has a great idea, they are talked into a new mold, and it doesn’t sell and they only do one order.  Thank goodness for early entrepreneurs.

What’s probably most amazing is the fact that it even exists.  It’s kind of like someone saying to you, “hey,  if you could make up a dream bottle, what would it be?”  How about a six-sided amber, Mountain Herb Bitters with a laid on ring?  After a little investigation, we are aware of possibly one other, possibly broken.  For all we know this was the bottle used to include in the book.  It just goes to show you, in the bottle world you never know what’s going to pop up next.  The owner is hesitant about selling it and I didn’t pursue it.  It would be an interesting bottle to sell, but for how much?  Like a lot of very rare and interesting bottles out there, we will never know. And like a lot of other great bottles we’ve ever seen, it is also one that we will also probably never own.   That’s our Featured Bottle this time around.

Note: The owner, John Cleveland, just got back to me on the origin of the bottle; “ We got the bottle in 1969 from one of Gails’ coworkers in Santa Ana, CA. She stated that she was found under an old log cabin on their property in PA somewhere.”

Thank you John for sharing this amazing bottle! 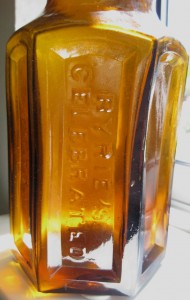 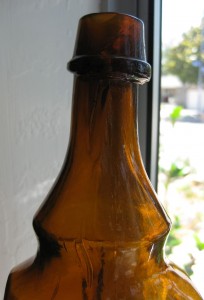 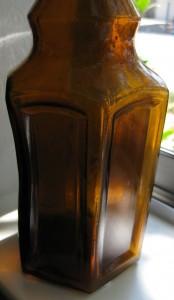 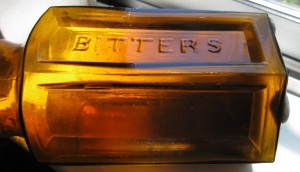 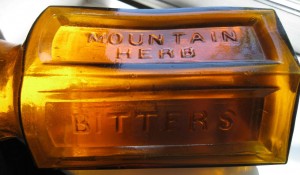 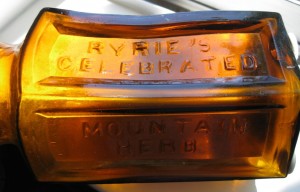 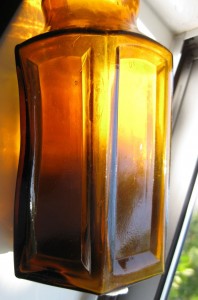